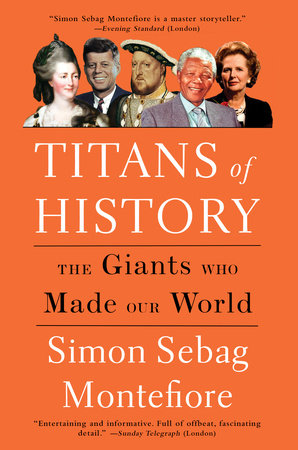 — DISCLAIMER: I received a free e-arc of this book via NetGalley – thank you to NetGalley and Vintage! All opinions expressed in this review are my own. I should also add that I am a trained historian and as such will likely be biased in reviewing a history book. —

I know this blog says it reviews YA novels, but please allow me the excursion into my other passion, history, as I feel that I have important things to say about this.

ABOUT THE BOOK: In this book, Montefiore tries to assemble a group of people who shaped our world as we find it today and writes short (a few pages per person) biographies of them, and how they have influenced history. His work spans from early antiquity to the late twentieth century, with a focus on the nineteenth and twentieth centuries. I understand that this is a new edition of a work that was originally published in 2012.

When I first found out that I would be reviewing a book written by Simon Sebag Montefiore, I couldn’t contain my excitement, as back when I was a baby student and wrote my very first history paper for university, his book on Stalin and Molotov was one of my main sources and I really enjoyed it. But to be honest, I had a hard time with this book. I tried very hard to shut off my academic historian voice and keep in mind that it is intended to be a popular history book, however, I feel like some of the issues I had with it were intensified when considering that this would be read by people who might not have read anything else on this subject.

In the beginning, I felt like the choices were made well in respect to diversity, both gender and location, and I even found out about a couple of medieval women I need to read more on (sadly, women were much less prominent as the volume continued…). But as the book went on, these choices seemed more and more skewered to me. Less than half of the book is dedicated to ancient and medieval figures, leaving out many of those I believe are crucial, but so far, so good – I’m a medievalist and am biased, and most people don’t care about that time period (which is a shame!) so he might not have wanted to force it on them. However, while the Renaissance and the early modern period get slightly more attention, the last third of the book is solely 20th century. To me, that does not make much sense at all, as many of the important people of the twentieth century were resting on the shoulders of thinkers much earlier. But this issue can be put down to preference.

What makes me worry much more, is the fact that the book is incredibly western-centric. Most figures originate from Europe and North America, a bunch – maybe around 10% if we’re feeling generous – from Asia, and at most a handful for Africa and South America. In today’s xenophobic society, telling the average person that no one important came out of these large areas aids with the right’s nationalism and fear of difference. Right now, society needs a reminder that our western culture is not the only one of importance and that, in their core, humans are equal, no matter how they look or where they hail from.

A second point that worries me in respect to this being aimed at the public is the historical methodology that seems to be lacking in crucial points. There are no references – at least not in the review version I received – and there is a lack of critical commentary. This is something I especially noticed in the areas where my expertise lays – theories are presented as facts without critical analysis or any mention that they are theories. Furthermore, supposed quotes of the subjects of the chapters are taken as granted, without reference to how they made their way to us, which makes them untrustworthy. A good example for this is the medieval muslim ruler Saladin: Montefiore gives a supposed quote, but does not refer to where this originated. Given the context, I could well imagine the quote having come from a western chronicler of the crusades, intent on making his side look good. Perhaps I am overly worried by this, but I feel like such portrayals might prejudice readers, and give society a much more biased image.

And now, let’s end on a couple of ‘technical’ issues. First and foremost, the chapters were too short. Reading a Wikipedia article on the person in question might give a reader more information. Especially the earlier chapters amount only to very few pages. As I read the book on my kindle, it is hard to judge, but I feel like the later entries were much more detailed and longer than earlier ones. The second of these is that the people are organised by their year of birth. Especially in the twentieth century that makes for an interesting reading experience – Margaret Thatcher coming before Anne Frank, for example. I believe that it would have made more sense to organise the biographies by the years where a particular person had the most impact. This could easily have been done in the background and the portraits kept as they are now, making for a smoother reading experience.