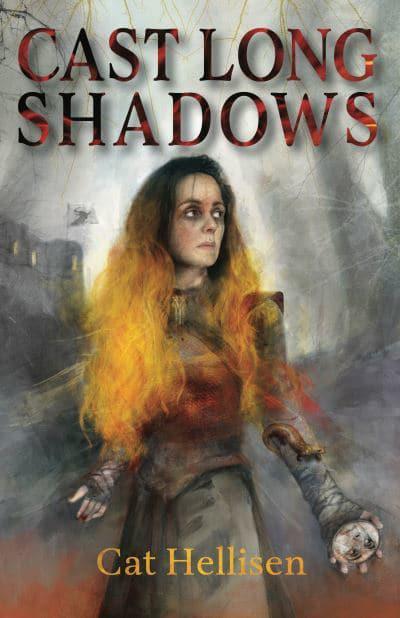 In a web of political machinations and religious tension, three women battle for survival with each other and, more poignantly, with their own selves. But this suggests a story of sweeping battles and loud proclamations, instead, Cast Long Shadows is full of quiet, and darkness, and stomach churning tension.

Marjeta Petrell.
Replacement bride, shadow of a dead and perfect wife, step-mother to a duke’s treasured daughter.
A girl out of her depth, alone and afraid.
Magic runs deep in her veins, stitched in blood ties, embroidered with kindness and pain.
In an unfamiliar court, Marjeta must discover who are her friends and who are enemies; who she can trust before she is accused of witchcraft and executed (from lunapresspublishing.com).

I was terrified of writing this review… of finishing this book… of confronting internalised misogyny, rejecting which feels so dangerous. Cast Long Shadows is a book about witches, sure, but it is also a book about women, and about how easy it is to brand your friend as an enemy when that is what you’ve been taught your entire life.

Marjeta’s initial perception of femininity as deplorable and dangerous is something familiar to me from my own teenage years – I, too, did not see magic in embroidery, or quiet charm-weaving, or well placed words in a world made by boot, gun, and shout, in a world made for men. It’s captured strikingly in the protagonist’s disdainful, pain filled words ‘What good is a message? Will it help her burn faster?’ Marjeta’s evolution through the novel is telling, just as my own had been, moving in evocative sweeping passages of excellent prose. It is, however, a little over-long, and I became inured to the tension. The distrust and paranoia strike close to home, as does the penitent abnegation of Lilika, Marjeta’s foil, for a transgression in equal parts real and imagined.

The novel presents a variety of complex mother figures, ranging from step-mothers to confidantes, that is refreshing in a work which touches on the archetypal narrative of the witch-bride come to replace the benevolent ‘real’ mother. And it offers a bleak justice at the end, but it leaves a sour taste, like old ashes.

It is not a comfortable read, but a necessary one, all the more for the work it does to rehabilitate logos and writing from the masculine paradigm. This might not be the kind of witch story you expect, but it is one that is sorely needed, and lies closer to the historical witchcraft accusations of the early modern period.

Earlier this week I got the #bookmail of my dreams